Pet turtles are popular pets, and box turtles are one of the most common. If you are considering getting a… 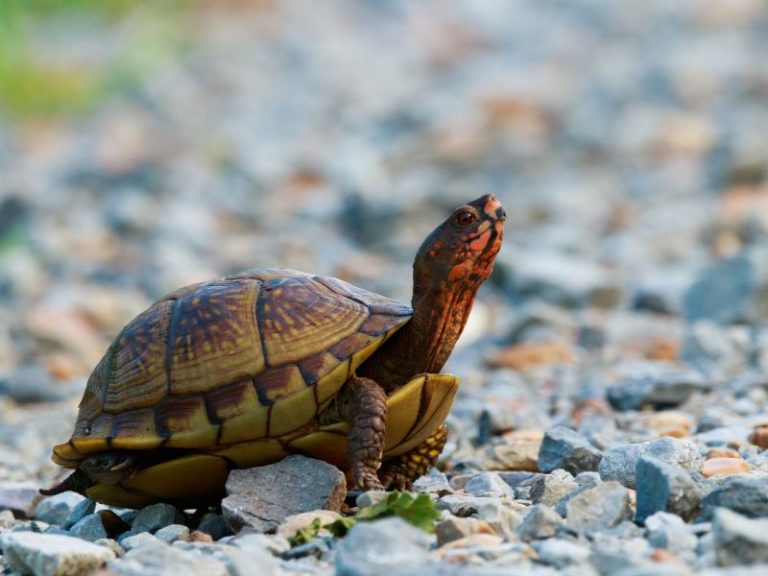 The idea of a pet turtle might seem a little silly to some people. However, these small creatures are great… There is something about turtles that fascinates us. Maybe it's their quiet strength or the way they can disappear into… Do you have a turtle as a pet? Or maybe you've seen one crossing the street on your way to… Turtles can be beautiful and fun pets, which require specific care requirements that we turtle owners should be aware of.… Turtles make the best pets that you can keep in your home or even at your workplace. However, when you… Do box turtles swim? This is a question stressing a lot of people, and most people tend to make huge mistakes. If you are looking into bringing a box turtle into your home, this article is going to relieve you of all the questions you might be having concerning a box turtle swimming habits.

So, can box turtles swim?

Well, the answer is yes. Box turtles do swim, but this is not an area they shine at. Their bodies are designed to tolerate much swimming like other turtle species. You should note that box turtles are terrestrial. This means that they spend most of their life on land as opposed to other turtles that tend to spend more time in water and occasionally come to land for warmth.

The box turtles are not expert swimmers. The reason behind this is that they have short legs with individual toes. These features make it hard for them to flap the water efficiently, and hence, swimming for them becomes tiring after a short while. Other turtle species like the painted turtles and the cooters have long webbed feet that suit aquatic life better. For this reason, ensure that you put the right amount of water, shallow waters to avoid drowning your pet.

Do All Box Turtles Swim?

How Fast Can A Box Turtle Swim?

Box turtles are slow and clumsy swimmers. This is probably because of their short legs and heavy shells on their back. Also, the fact that they live more on land can be another factor why they cannot swim fast. They can only swim for short distances, after which they will need to rest.

An experiment shows that a box turtle can move at 0.25mph over a short distance and 0.17mph in long distances when walking. Approximately, this is less than 100 yards covered in a whole day of walking. This is a slower pace compared to other turtle species like cooters that can walk at 1.07 mph. The same results will be exhibited when they are swimming. They are generally slower at swimming than they are at walking, which is much slower as compared to other turtle species.

Can Box Turtle Live In Water?

Like other turtle species, a box turtle can live in water. However, not as long as other turtles would. Keeping in mind that it is not an excellent swimmer, it would not thrive well in water. For instance, in the presence of a predator, a box turtle would not be fast enough to evade it. Also, a turtle cannot spend all its life swimming. It will reach a time when he requires rest. A box turtle would rather sink to the bottom than swim to the surface for rest when tired. This is typically a call to its death since it can only survive for a few minutes in deep waters.

How Long Can Box Turtles Swim?

Box turtles tend to swim on water surfaces and in shallow waters like ponds, rivers, and creeks. They only swim when it is very necessary, like when they need to get to some other place. As already established, box turtles are not sea dwellers. Thus, if exposed to water for so long, it becomes tiring for them to swim, which can consequently lead to drowning.

This is in contrast to other sea turtles that can spend most of their day swimming. Apart from having short legs, they also have a large box-like shell, which makes swimming tiring for them. That being said, averagely, at a single stretch, a box turtle can swim for twenty to thirty minutes. If exposed to water any longer, it can lead to physical or health issues for the animal.

What would happen if a box turtle was in deep water?  Swimming for a box turtle is a troublesome experience. They can only swim for short distances, and this they do while in shallow waters, after which they need to take some rest. A box turtle, when tired, will sink to the bottom of the sea for rest. This poses smaller chances for them to survive since they can only survive down there for a few minutes.

When they are in deep water, they only swim for a few minutes, after which they tend to cling on one side of the pot for rest. It is easy to think this as water fright, but after observing them for multiple times, it is evident that the box turtles would rather be in surface water as opposed to deep waters. Read also Can Tortoise Swim? post.

How Much Water Do Box Turtles Need?

Therefore, the ideal water level for a box turtle should not cover its shell wholly. It should only go halfway. This level makes it ideal for feeding and also eases its movement. It is also prudent to know that box turtles are freshwater turtles. Therefore, providing a clean and freshwater environment is mandatory. Clean its tank and change the water at an interval of three weeks so that they can stay healthy and put them away from diseases. There is a greater chance for a box turtle to drown when in deep pools and tanks. They can only hold their breath for thirty minutes tops. This is because they will tire easily of swimming and take more energy to swim through the water. This is the reason why you should ensure that their tanks have shallow waters to keep them comfortable.

Can A Box Turtle Swim In Tap Water?

Typically, any freshwater is ideal for a box turtle species to swim in. However, tap water used for day to day home chores contain chlorine and other elements. Although these elements pose no hazard to the life of the turtle, it leaves white spots on its shell when it dries out. This removes the natural beauty of your box turtle.

Therefore, it is more preferable to use distilled water to rear your box turtle rather than basic tap water. Besides, a box turtle does not require a lot of water to survive. Buying a few liters of water every three weeks won’t do you major financial damage. rather, it will enhance the health and appearance of your pet.

Can A Box Turtle Swim In Deep Water?

Well, box turtles increase their chances of drowning when they are in deep water. They are not good swimmers, and they are also not that good at holding their breath. They prefer to swim in shallow waters as compared to deep waters. Will A Box Turtle Bite?

Box turtles are generally docile animals and perfect animals to keep as pets. They rarely bite humans and are safe to pick. However, they can bite if mishandled or when they are irritated. Hence, avoid leaving them with small children since they might handle them too much or move them too fast, which can result in stress or bites.

Save this pin concerning Can Box Turtles Swim on your pet-related board on Pinterest.

What Is The Best Small Turtle For A Pet? [Tiny Turtle Pets]

How Do Turtles Mate? How Do I Know That My Turtle Is Mating?